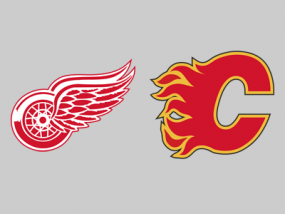 So I realize I’m being quite the pessimist as of late but I’d rather look at the negative after a win than the positive after a loss. I love that the Red Wings are winning games but I look at a game like tonight and think, again, that it was a win they didn’t deserve.

That said, this is a different kind of undeserved win than the ones I complained about against St. Louis and Anaheim. Well, closer to Anaheim than St. Louis at least.

The Red Wings would not have won tonight’s game without the Flames repeatedly shooting themselves in the foot.

Matt Stajan’s ridiculous holding penalty with 4:31 remaining didn’t hurt Calgary but it was pushing their luck. Jarome Iginla squaring off with Justin Abdelkader (before the linesmen intervened) was just stupid on the Calgary captain’s fault.

There was nothing for the Flames to gain by Iginla fighting Abdelkader. The penalty would have been matching whether the fight had happened or not and taking Iginla off the ice at the expense of Abdelkader is a move the Wings would make in an instant. Maybe Iginla wouldn’t have touched the ice on the PK but he should have been on the bench with his team.

Cory Sarich’s broken stick in the final seconds? The Wings couldn’t have asked for a luckier break (pun not intended). While Pavel Datsyuk’s pass and Henrik Zetterberg’s shot to tie the game were fantastic, none of that happens without that insane piece of luck.

Until the overtime the Red Wings could get nothing going. Their forecheck was weak, they couldn’t keep control of the puck, and in their own end Jimmy Howard had another off night.

And then Nicklas Lidstrom made a great move in OT and Detroit got two points out of a game they were four seconds away from getting none.

Red Wings Rally but Fall to Wild in OT