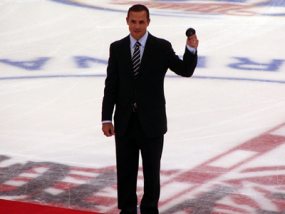 I’m with Saler on this one. Tampa? Really?

Yzerman is probably the most coveted potential GM in the league right now. He could have had his choice of team and he goes to the complete mess that is the Tampa Bay Lightning? I wish him the best of luck (only because he’s in the Eastern Conference now) but I can’t say I understand this.

A lot of the local media seemed to think this wasn’t going to happen. I think not enough stock was put in the report that Ken Holland had been asked to vacate the Detroit GM role and move up to president of the Red Wings. In hindsight, you can see that a move like that wouldn’t have been requested if there wasn’t a need to make an offer to Yzerman immediately, so we should have known this was coming.


Lidstrom to Return to Red Wings