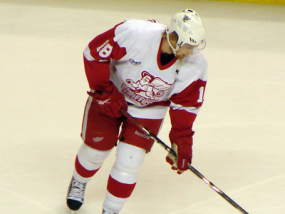 Kicking this thread off early ’cause I’m planning on building my new deck all day and really don’t know if I’ll have time to post later. Hell, I don’t even know if I’ll catch the game yet.

Only note I find interesting is that Mike Babcock is considering swapping out Jason Williams for Mattias Ritola. To that, I shrug.

Ritola didn’t knock my socks off in his stint with the team earlier this year but I’m also of the opinion that Williams can’t get out of Detroit fast enough. Brad May would be no better of an addition. Jan Mursak? Not really a lot of options. And having Williams as the right-handed shot on the point on the power play doesn’t matter if you don’t get any power plays.

I still have a tiny bit of hope that the Red Wings can pull this off but not if they play like they’ve played the first three games of the series, specifically the third period on Tuesday.

Win tonight and it’s back to San Jose with the Sharks knowing they blew a chance to sweep. Win Saturday and it’s back to Detroit with everyone in the hockey world talking about how this could be a classic San Jose choke job.

So it’ll take a lot, and it’ll take the Sharks crumbling a bit, but stranger things have happened. I’m not sure I see it happening but the possibility is there if the Wings can rise up and take it.