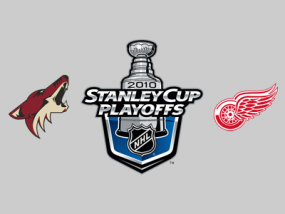 I can’t say I’ve ever seen a team win a game in which they gave up three power play goals, so Detroit probably didn’t deserve the win tonight. Say what you want about the officiating (and I will in a second) but the Wings’ PK absolutely failed them tonight. If a single penalty kill had been successful, we have a different outcome. And don’t talk to me about the fourth Phoenix power play, that wasn’t a successful kill, the Coyotes killed it by taking a penalty of their own.

A part of that is that the Red Wings lost several key faceoffs. The first and third Phoenix goals came directly off of a lost draw. That cannot continue.

One coaching complaint… When you know the team you’re facing is going to come out and literally hit you with all they’ve got, you put out a lineup that can counter that. I know the Red Wings are obsessed with having a right-handed forward on the point on the second power play unit but Jason Williams is not cutting it.

Williams should have been in the press box with Justin Abdelkader in the lineup. Abdelkader led the Red Wings in hits before being sent down to GR as a cap casualty. Throw him out there and give the Coyotes a taste of their own medicine.

As for the officiating, I won’t complain about what was called but two uncalled penalties really bothered me.

Over at A2Y someone posted that the Wings needed to do a better job of covering the point on the PK. On the game-winning goal, Derek Morris was left all alone to blast a shot past Jimmy Howard.

Why was he so alone? Not because Detroit was down a man but because the man who was supposed to be on Morris, Darren Helm, had been driven to the ice away from the puck by Shane Doan.

Doan knocks Helm down on the faceoff, Morris is left wide open, goal. Doan leaves Helm alone, Helm gets out to cover Morris. Maybe still a goal but that play never would have happened.

Also blatant: The uncalled high stick on Nicklas Lidstrom. Lidstrom takes a stick to the face that draws blood, with the puck still nearby, and no one was looking? Four officials and not a single one saw that? Again, unacceptable.

So I’m not happy about the game but there’s plenty of time for a turnaround. A Detroit win on Friday will mean the Wings have claimed home-ice in a five-game series. The pressure is on the Coyotes for these first two games, I don’t think they can play a game like they did tonight for every game of the series.