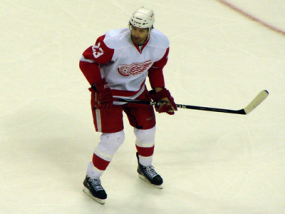 The win locked the Red Wings into the Western Conference’s fifth seed and a first-round matchup against the Phoenix Coyotes while preventing the Blackhawks from moving up to the conference’s top spot.

Stuart’s goal came after Henrik Zetterberg made a strong individual effort to gain the Chicago zone and draw three Blackhawks to him. He then passed across to Danny Cleary in the right faceoff circle, who centered the puck to a streaking Stuart to snap past netminder Antti Niemi.

Chicago had opened the scoring with 5:04 left in the first period. Jonathan Toews drove the net from the left of goalie Jimmy Howard and cut across the crease. Dave Bolland came in from Howard’s right and banged home the rebound of Toews’ chance, just 11 seconds into a Blackhawks’ power play.

The Red Wings tied things up 5:01 into the second, when Patrick Eaves corralled the rebound of a chance by Cleary, knocking in a bouncing puck.

Tomas Holmstrom deflected a Brian Rafalski shot at 7:10 of the third to put Detroit up by a goal but Colin Fraser redirected a Marian Hossa shot past Howard with his skate 3:34 later to tie things back up.

Chicago’s opening goal was the only power play goal of the game. The Blackhawks had four tries with the extra attacker while the Red Wings had two.