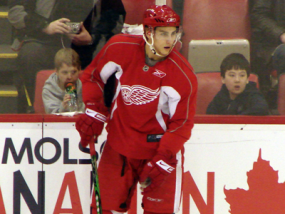 The Detroit Red Wings had a two-goal lead less than halfway through the first period Saturday night but couldn’t hold onto it, dropping a 3-2 decision to the Los Angeles Kings.

Valtteri Filppula walked in untouched on Los Angeles goalie Jonathan Quick, beating him with a wrist shot from the left faceoff circle at 5:29 of the first to open the scoring.

Just 2:02 later, a Brian Rafalski shot bounced off Todd Bertuzzi’s knee and went past Quick on a five-on-three to put the Red Wings up by a pair.

The rest of the game would be all Los Angeles, however.

Anze Kopitar beat Detroit goalie Jimmy Howard on a rebound chance after a turnover by Jonathan Ericsson only 1:55 into the second period.

Peter Harrold tied it up at 6:27 of the third, then Brad Richardson put the Kings in front with 7:57 remaining, tipping in a chance from the slot.

The loss leaves the Red Wings three points behind the Kings in the standings and drops them back out of a playoff spot.

The Red Wings went 1-for-3 on the power play while the Kings were scoreless in the same number of chances with the extra attacker.

Three fans made their way into the Joe Louis Arena rafters over section 124 at the start of the third period. The section was evactuated while security handled the situation.