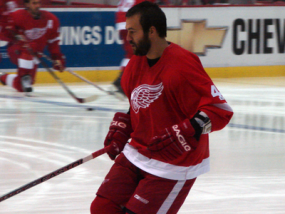 The Detroit Red Wings overcame 2-0 and 3-2 deficits Saturday night to earn a 4-3 shootout win over the St. Louis Blues, ending their losing streak at three games and breaking a shutout streak that had almost reached three games.

Todd Bertuzzi scored the game-winner for the Wings, beating St. Louis goalie Chris Mason in the fourth round of the shootout and coming up big at a time when his lack of offense (three goals and nine points on the season) is a concern.

Henrik Zetterberg had tied the game with just 57 seconds remaining in regulation. With Detroit netminder Jimmy Howard on the bench for an extra attacker, Zetterberg threw the puck to the front of the net from behind the goal line and banked it off of defenseman Barret Jackman after a flurry in front. It bounced off Jackman and into the net before Mason even saw it.

David Backes opened the scoring for the Blues with 6:36 left in the first period, tipping a shot by David Perron past Howard.

Roman Polak put St. Louis up by a pair with a seeing-eye shot from the blue line through a screen 3:38 later.

Tomas Holmstrom tipped in a pass from Zetterberg on a Detroit power play to get the Red Wings on the board at 2:35 of the second period.

Nearly a period later, Kris Draper finished on a net-front scramble, tying the game at 2:27 of the third.

Brad Boyes banged home a rebound to put the Blues back in front at 8:32 of the third before Zetterberg tied it.

Detroit scored on their only power play of the game while the Blues were held off the board on two chances with the extra attacker.