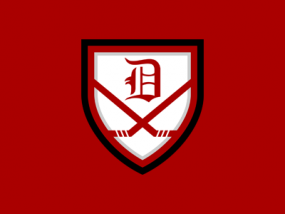 105
0
by Clark Rasmussen
In General

Normally it’s the primary site logo but every fourth day it’s our alternate logo. Additionally, on certain special days themed versions of the logo appear. There is a St. Patrick’s Day version of the logo, a Canada Day logo, and an Independence Day logo.

This morning I logged on to the site and was surprised to see the round logo featuring the site name and the “Established 1996” text that appears in the header twice each year.

The significance of that logo? Today is DetroitHockey.Net’s 13th birthday. I had completely forgotten it was coming up.

Thirteen years ago this site began on AOL as a single page dedicated to the Red Wings and recapping the 1996 World Cup of Hockey. Then known as “YzerFan19’s Detroit Red Wings Page” it later moved to GeoCities and became “DRW Central.” In 1999 the site was a founding member of the short-lived widesports.com collective before moving to its own domain and becoming drwcentral.net later that year. The final move in 2002 brought the site to its current name and home.

In honor of the site’s birthday, I’m giving away a t-shirt from our shirt store to one randomly-picked user who makes a post in the forums or comments on an article on the site in the next two days.

This is one way for me to say thanks to all the visitors who have been coming around for so long. If you have any questions about the contest, feel free to post them here. It’ll get you answers and get you registered to win all at once.