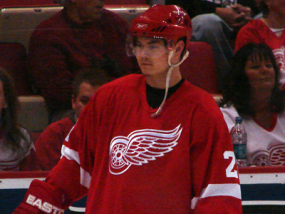 48
0
by Clark Rasmussen
In Game Recap

Four different players scored for the Detroit Red Wings Sunday, carrying the team to a 4-1 win over the Anaheim Ducks and giving the Red Wings a 3-2 lead in their Western Conference Semifinal series.

Chris Osgood stopped 16 of the 17 shots he faced in net for Detroit, helping the team capitalize on the low number of shots allowed.

The Red Wings outshot the Ducks 14 to three in the first period but neither team got on the board until Johan Franzen scored at 3:23 of the second.

Justin Abdelkader, making in his first postseason appearance in place of the injured Tomas Kopecky, moved the puck on a rush to Franzen at the Anaheim blue line. Franzen stepped up and snapped a shot off of the crossbar and in behind Anaheim netminder Jonas Hiller.

Henrik Zetterberg drove a shot on net that Hiller stopped but the rebound popped into the air. Hudler followed it up, whacking the puck in behind Hiller just after it dropped below crossbar height.

Ryan Whitney scored Anaheim’s only goal with 4:23 left in the period and the Ducks on a power play, snapping a shot past Osgood after a scramble left Detroit’s defense spun around and Osgood screened.

Darren Helm scored his first goal of the playoffs to restore the two-goal lead with 3:08 left in regulation, banging home a rebound after a goalmouth scramble with Dan Cleary and Henrik Zetterberg.

Zetterberg added an empty net goal for the second consecutive game, finishing off the scoring.

Each team had three power play chances. Anaheim made good on one of theirs while the Red Wings were held without a power play goal.