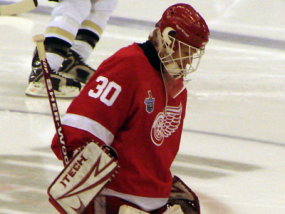 Chris Osgood returns to the Red Wings’ crease tonight as Detroit hosts the Los Angeles Kings. This marks his first start since a 6-5 shootout loss to the Colorado Avalanche on February 15.

Tomas Kopecky also returns to the lineup, taking his spot on the fourth line with Ville Leino moved up to the second line to take the injured Marian Hossa’s spot.

Hossa, hurt during the second period of Wednesday’s win over San Jose, is questionable for tomorrow’s matchup in Nashville.

Chris Chelios and Brett Lebda are healthy scratches. Lebda has recovered from his back injury enough to play if called upon.

I’ll probably miss the start of this one while I’m working on some projects around the house. I’ll catch up as soon as I can.

Hossa Out Against Kings