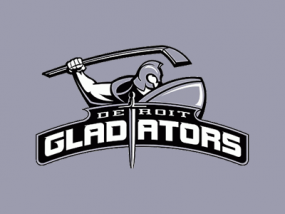 Detroit WHA Entry to be Known as “Gladiators”

8
0
by Clark Rasmussen
In General News

Detroit’s World Hockey Association franchise set to begin play this fall announced today that they will go by the name “Detroit Gladiators.”

Senticore, Inc., owners of the Gladiators’, unveiled the team name and logo through their web site (www.senticore.com) late in the afternoon on Wednesday.

The Gladiators’ logo uses the colors black, white and gray/silver. It features a helmeted warrior visible from the chest up waving a sword-like hockey stick in the air and carrying a shield in front of him. Below the gladiator is a logotype bearing the words “Detroit Gladiators.” In the wordmark, “Detroit” appears over “Gladiators,” with both words arched and in stylized fonts. The “T” in “Detroit” and the “I” in Gladiators are created by a sword sticking “through” the wordmark.

The Gladiators are the first team to officially release a team name and logo, although the prospective team in Toronto has been referred to as the “Toros” and the team in Quebec has been called the “Nordics.” A Toronto Toros logo has been circulating around the Internet but as the team has not yet secured a lease, they have not officially released the logo.

The World Hockey Association will begin play in October. It currently exists of the Detroit Gladiators, Halifax, Quebec and Dallas. Toronto and Hamilton have been granted franchises but not yet secured leases while groups from Cincinatti and Orlando are also reportedly interested in owning teams.

The Gladiators will play their 40-game home schedule at the Pontiac Silverdome.