The Red Wings announced on Wednesday that defensemen Danny DeKeyser and Marc Staal will serve as the team’s alternate captains for the coming season.

They join returning captain Dylan Larkin, who will wear the C for Detroit for his second season.

The pair take over for Frans Nielsen and Luke Glendening.  Nielsen was bought out by the team over the summer and Glendening departed as a free agent for the Dallas Stars.

As I wrote on Sunday, DeKeyser and Staal wore the A for all three of their preseason games and were two of four players that appeared to be in the running to get the alternate captain designations for the 2021-22 campaign.  The other two players were Sam Gagner and Robby Fabbri.

It will mark the first time in over forty years that two defensemen have been assigned letters for the Red Wings. 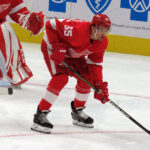 Using the Red Wings' preseason rosters to guess at who the team's new alternate captains will be.

The Red Wings announced the signing of defenseman Marc Staal to a one-year contract extension on Sunday.