The Red Wings traded defenseman Patrik Nemeth to the Colorado Avalanche for a fourth round draft pick in 2022 on Friday night.

UPDATE: The #RedWings have acquired a fourth round pick in the 2022 NHL Entry Draft from the Colorado Avalanche in exchange for defenseman Patrik Nemeth. pic.twitter.com/dz4URzVck3

The move comes in advance of Monday’s NHL trade deadline.  The Red Wings will retain 50% of Nemeth’s salary in the transaction.

Detroit signed Nemeth as a free agent from Colorado during the summer of 2019.  He played 103 games for the Red Wings, notching 17 points in a shutdown role.

Nemeth is due to become an unrestricted free agent in the coming offseason.

The deal marks the first-ever direct trade between the Red Wings and the Avalanche.

The first report that something might be up came via DH.N’s roster monitoring.

Patrik Nemeth just got removed from the Red Wings roster

I will continue to lament the fact that the Red Wings don’t have the pieces to acquire better picks than this, but I like the move.  Just because they can’t get anything better doesn’t mean they shouldn’t sell what they have. 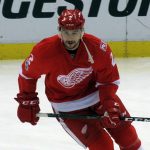