The Red Wings kick off their training camp for the truncated 2021 season tomorrow, announcing the camp roster and schedule today.

The #RedWings today released their training camp roster and schedule, comprised of 40 players who will hit the ice on Friday, Jan. 1 at the BELFOR Training Center inside Little Caesars Arena.

With the roster announced, I can do one of my favorite things of the season: Look for oddities surrounding jersey numbers.

The team is only taking forty players to camp, so there aren’t as many numbers to look at, and most of those were known already.

Ryan’s #54 was previously worn by Matt Puempel, who the Red Wings did not re-sign over the offseason.  Stecher’s #70 was worn last season by Christoffer Ehn, who was unsigned and returned to Europe.  Greiss’ #29 was worn in last year’s camp by Vili Saarijarvi before being taken by early-season acquisition Brendan Perlini (with Saarijarvi traded away a few weeks later anyway), who was not re-signed by Detroit.  Staal’s #18 had been assigned to Albin Grewe at the 2020 Development Camp.

European free agent signing Mathias Brome has been assigned #86, his usual number.  It was worn in last season’s camp by Charle-Edouard D’Astous.

Barber’s #26 was worn in camp last season by Griffins captain Matt Ford, who is not in Detroit’s camp this year.  Criscuolo’s #42 was worn by Mathieu Bizier.  Boyle’s #34 had been assigned to Victor Brattstrom at the start of last season and temporarily given to Eric Comrie for the few games he spent in the Red Wings organization.

The only returning player to change jersey numbers is try-out goalie Pat Nagle, who will wear the #68 that the team usually reserves for goalies who aren’t actually in the Red Wings’ system.  In that role last year, he wore #60, while Sean Romeo wore #68.

Criscuolo isn’t a returning player but has been in a Red Wings’ camp before, wearing #74 in 2016 before spending that season with the Griffins. 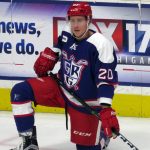 With the release of the Red Wings' training camp roster, we take a look at the handful of jersey number changes it reveals.