My first thought when I saw longtime Red Wings beat writer Helene St. James’ new book, “The Big 50: Detroit Red Wings” was, “Oh, great, another one of these books.”

I’ve admitted in the past that I have a hard time with Red Wings history books because, in the world of Wikipedia and social media and blogs and so many outlets for storytelling, it’s hard for a physical book – with its long lead time – to have anything new.  When we’ve heard all the stories, the book has to find a new angle to grab us.

To make matters worse, on its face, “The Big 50: Detroit Red Wings” is built a lot like 2014’s “100 Things Red Wings Fans Should Know & Do Before They Die” by Kevin Allen and Bob Duff.  It’s a collection of independent stories, each focusing on a different topic, without a narrative thread to follow aside from everything being about the Red Wings.  The two books even have the same image – a replica version of Henrik Zetterberg‘s home jersey – on their covers.

With that in mind I wasn’t expecting much and ended up happily surprised.

Many of the chapters, specifically early chapters on Gordie Howe, Steve Yzerman, and Mike Ilitch, are surprisingly in-depth.  The Ilitch chapter, notably, includes a sidebar on often-overlooked Marian Ilitch.  This is repeated in a later chapter on James E. and Bruce Norris, where the sidebar covers the short reign of Marguerite Norris.

While certainly not a scathing commentary, St. James doesn’t shy from touching on some of the negatives of the Red Wings’ history.  The chapter on Bob Probert, for example, focuses as much on his off-ice issues as his on-ice successes.  With Probert it’s hard to separate the two but it can be – and has been – done, and St. James doesn’t take that out.  These books have the tendency to lean towards “fluff” but this one doesn’t, with the Probert chapter a particularly painful read.

Additionally, while the Red Wings organization has a tendency to ignore Larry Aurie and his retired sweater number 6, St. James includes it in a sidebar in the chapter about the team’s retired numbers.  As someone who thinks #6 should be in the Little Caesars Arena rafters, I think she could have taken that further, but just mentioning it at all is more than usually happens.

The book’s format does prove difficult from time to time, as it leads to a lot of repetition.  The story of the Russian Five, for example, is told in their own chapter, chapters on individual members, the chapter on the Red Wings’ playoff streak, Scotty Bowman‘s chapter, and the chapter on the 1989 Draft.  Somewhat humorous, to me, is that despite all of that repetition, there is no reference to the short-lived Russian Five II featuring Dmitri Mironov (though Mironov himself gets a mention in Tomas Holmstrom‘s chapter, with Mironov’s acquisition being the catalyst for Holmstrom’s early-career jersey number change).

There were also two editing errors that jumped out at me, taking me out of the story.  At one point, Anaheim goalie Jean-Sebastien Giguere is referred to simply as “Sebastien Giguere” while the 2016 Stadium Series game in Denver is referred to as the Winter Classic.  Those things happen in publishing but seeing them made me laugh.

My original thought did hold in one part: There’s no getting away from comparing this book to Allen and Duff’s.  In my opinion, this one is the better of the two. 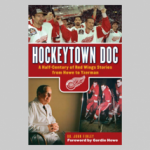 I was recently asked to take a look at Dr. John Finley's new book, Hockeytown Doc - A Half-Century of Red Wings Stories from Howe to Yzerman.  By coincidence, the request came on the heels of posting my thoughts on Tal Pinchevsky's Breakaway: From Behind the Iron Curtain to the NHL - The Untold Story of Hockey's Great Escapes.  I'm not looking to get into the business of book reviews but with no NHL games, I'm already reading more. 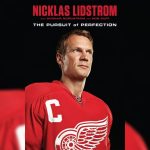 A review of the new biography, "Nicklas Lidstrom: The Pursuit of Perfection."

Back in January I wrote a bit about the Red Wings' banners at Joe Louis Arena.