The Detroit Red Wings announced the signing of forwards Adam Erne and Taro Hirose to one-year contract extensions on Thursday.

Financial terms were not announced because who would want to know that in a salary cap league?

The pair were set to become restricted free agents after receiving qualifying offers from the team yesterday.

As I mentioned yesterday, I don’t like the idea of bringing Erne back.  I don’t think he offered as much as the Red Wings hoped when they acquired him from Tampa Bay last summer.  That said, at a cheap enough salary that could become irrelevant. 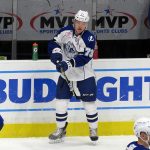 On the Red Wings' Glut of Forwards

With the Detroit Red Wings set to return to the ice as soon as Wednesday, and games set to begin as early as January 15, questions about the team's lineup will soon be answered.