The move allowed them to send blueliner Brian Lashoff, who had been called up on Thursday night after Filip Hronek was placed on injured reserve, back to the Grand Rapids Griffins.

Given the Red Wings’ injury scenario this season, it’s unsurprising that the team would want to carry eight defensemen right now.  With the trade deadline on Monday, I’m sure the team is hoping to have unloaded some of their defensemen for draft picks.

That said, this feels like the Eric Comrie trade to me.  What good is your farm team if it can’t provide players for short-term injury relief?

I’m sure some would say that there’s value in keeping the Griffins’ lineup together, I just don’t buy it that much.  But, unlike Comrie, Goloubef comes for free, so while I don’t see the need for the claim, I’m also not concerned about it. 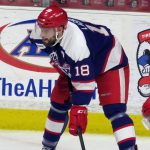 The Red Wings called up defenseman Brian Lashoff from the Grand Rapids Griffins on Thursday.