There are a handful of cities that often pop up in rumors regarding NHL relocation or expansion.

Quebec is one, with their recent expansion bid partially hindered by the NHL’s geographic imbalance.  Seattle is going through the expansion process right now and is expected to be awarded the league’s 32nd franchise.  Houston, with a new owner for the NBA’s Rockets who is receptive to an additional tenant at Toyota Center, has jumped into the discussion of late.

And then there’s Portland, Oregon.

Portland, home of the Western Hockey League’s Winterhawks, has sniffed at the NHL twice in recent memory.

In the late 1990s, Microsoft co-founder Paul Allen – owner of the NBA’s Portland Trailblazers -, backed out of an expansion bid in the round that led to new NHL teams in Nashville, Atlanta, Columbus, and Minnesota.

Just a few years ago, the Arizona Coyotes were rumored to be eyeing the Allen-controlled Moda Center as a landing spot as their (still ongoing) arena issues in Glendale seemed to be coming to a head.

Through spokespeople, Allen has stated that he has no interest in pursuing an expansion franchise for Portland.  However, if one became available for relocation, he would have interest.  Additionally, Winterhawks owner Bill Gallacher has indicated interest in NHL ownership.

Which brings us to a batch of ten internet domain names registered on Thursday by the Portland Winterhawks.

Four of them seem relatively benign.  You could make the case that hockeytownpdx.com, portlandhockeytown.com, playhockeyoregon.com, playhockeyportland.com could all be used in relation to the Winterhawks or other community initiatives (though the Detroit Red Wings might have something to say about a couple of those).

A fifth – hockeytoportland.com – would look innocent coming from anyone other than the Winterhawks, as they’ve already brought hockey to Portland.

The final five, however, explicitly state what kind of hockey would be coming to the Rose City:

That’s five domains making reference to the National Hockey League coming to Portland, all registered by the Portland Winterhawks.

This is hardly confirmation of something coming.  As the Winterhawks do not control Moda Center, this would look a lot more convincing if the domains had been registered by someone affiliated with Paul Allen’s group.

That said, the Coyotes’ arena issues are still unresolved, the Calgary Flames have threatened to move without a new arena, Allen is interested in a relocated NHL team, and now we have domain registrations tied to Portland’s existing team – whose owner is from Calgary and who is already a tenant at Allen’s arena.

It could be nothing.  Or it could be a sign of the NHL’s next franchise move. 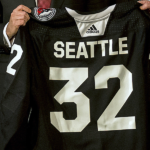 Domain registrations could show that Seattle Kraken HC could be the name of the NHL's expansion franchise in Seattle.

2 thoughts on “NHL to Portland? Domain Registrations Hint at It”