I’ve made it pretty clear that I’m on #TeamTank for the Red Wings.  They can’t finish 31st overall anymore to get the best odds in the NHL’s draft lottery – and they probably can’t finish 30th, either – but they could still drop to 29th and get an 11.5% chance at drafting Rasmus Dahlin first overall.

The argument against the tank is that an 11.5% chance isn’t all that great, and not that much better than the 7.5% chance they currently hold.  You can’t expect players to give up, anyway, and it’s worth the drop in draft position to give young players such as Anthony Mantha, Dylan Larkin, Tyler Bertuzzi, and Joe Hicketts valuable experience, playing hard even in games that seemingly don’t matter.

That last point is absolutely valid.  The Wings’ younger players have looked good as the season winds down and that bodes well for next season and beyond.

The second point, that you can’t expect players to give up, makes sense but is a little harder to handle.  After seeing the Red Wings drop ten consecutive games looking relatively awful earlier this season, it’s a little hard to see them suddenly look so much better when more of those losses could actually be put to use.  But that’s how a season goes; you have ups and downs.

The problem I have is with the first argument, and I have it for two reasons.

The second is that it focuses entirely on first overall when there are more players to look at.

Dahlin is the consensus number one pick and is in a tier of his own when it comes to the available players in the 2018 NHL Entry Draft.  Then come forwards Andrei Svechnikov and Filip Zadina, then back to defensemen with Evan Bouchard, Quinn Hughes, and Adam Boqvist.  You could argue for Brady Tkachuk or Ryan Merkley, especially depending on each team’s needs, but that’s the top group I’m going to go with.

The Red Wings need a defenseman.  I could see them picking Svechnikov and uniting him with brother Evgeny but it wouldn’t make a ton of sense.  Win the lottery and that’s easy, it’s Dahlin.  Lose and you’re looking at Bouchard, Hughes, or Boqvist.

But what if you not only lose but get passed by lower teams?  That’s what I think the Wings should be worried about.

Detroit holds the sixth overall pick right now at 26th in the current standings.  That puts them in a position to get one of the four defensemen on our list.  But it also means there’s a 31% chance that they get passed by at least one team, bumping them out of the top six and into a position where they have to hope another team reaches for someone else.

If they were to drop behind the Vancouver Canucks and up to the fifth pick at 27th in the standings, the chances of getting bumped out of the top six drop to 9.61%.  That becomes 2.98% if they drop to 28th and it becomes impossible to go lower than sixth overall after the lottery if they end up in 29th.

Tanking wouldn’t just increase their chances at getting Dahlin but put them in a better position if they don’t.

That said, as I admitted above, you can’t expect the players to quit.  If they wouldn’t embrace the tank for Dahlin, they’re not going to just to make sure they get Hughes instead or Merkley or something like that.  I just think there’s so much focus on first overall that we lose sight of who will be available when the Wings are more likely to pick. 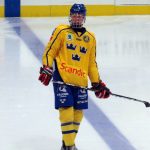 3 thoughts on “On Lottery Odds and the Red Wings’ Options”