We’re a week into the Red Wings’ preseason, having wrapped up training camp and three exhibition games, and forward Andreas Athanasiou is still not with the team.

The most recent report from MLive’s Ansar Khan – who still has me blocked on Twitter – is that Athanasiou is asking for $2.5 million per season while the Red Wings are offering $1.9 million.  That doesn’t match what I’d heard Athanasiou was asking but I’m not hung up on that because the $1.9 million is more important to me and has been reported by several outlets.

Last night I Tweeted the following about that:

Oversimplification… Ken Holland is holding firm at thinking Andreas Athanasiou is worth half what Darren Helm is.

It was an intentional oversimplification but I think there’s a point there nonetheless.

The knocks against Athanasiou are that he’s a one-dimensional player and that he only has 101 NHL games under his belt.  And they’re valid issues.

But if I’m Athanasiou, I’m looking at Darren Helm’s contract for $3.85 million per season.  I’m saying he’s one-dimensional, too, it’s just that defense is his dimension.  I’m saying he was given his contract at age 29, just as a player known for his speed could be expected to begin his decline, which is just as much of an unknown as youth is.

If I’m Athanasiou, the Wings’ first offer is still in my mind.  $1.2 million per season.  It’d’ve made the Red Wings second-leading goal scorer their second-lowest-paid forward not on an entry level deal, above newcomer Luke Witkowski.  Even the $1.9 million deal lifts him only past Luke Glendening.

Are there deals across the NHL that can be used as comparables to show that Athanasiou is worth no more than $1.9 million?  Of course.  The problem is that Ken Holland already has a history of giving out bad deals.  If I’m Athanasiou, I’m looking at $1.9 million and saying, “Now?  You just happen to get sane about your contracts when it’s my turn?”

Athanasiou seems to me like the kind of guy who’d get offended by a low offer.  I don’t see that as a bad thing but I know there are plenty who would.  I think he’d find it hard being the team’s second-highest goal scorer and being paid like their fourth-line faceoff specialist.

By extension, I don’t think the two sides are as close as it’s been reported lately.  Whatever number they say he wants, I think Athanasiou wants to not be among the lowest-paid forwards on the team.  It takes getting up to Helm’s $3.85 to do that.

Do I think he’ll actually get that?  Not a chance.  But I can see why he’d be unwilling to give any more than he already has.  So if Holland is holding firm at $1.9 million and Athanasiou is already at $2.5 million, that $600,000 might as well be $6 million.

But I admit that this is all conjecture.  Athanasiou may very well sign for $1.9 million minutes after I publish this.  If I’m reading him right, though, I don’t see that happening. 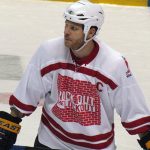 On Hope and Excitement, and Lack Thereof

Why I'm having trouble getting excited for the new Red Wings season.

Finally putting together some notes on the end of the Red Wings' season.

4 thoughts on “Thoughts on Athanasiou’s (Lack Of) Contract”