In just over two weeks, the Grand Rapids Griffins will raise another Calder Cup Championship banner to the rafters of Van Andel Arena.

They’ll then probably move it to a spot on the service walkway on the south end of the stadium but that’s beside the point.

I was at the Van for a concert last night and was looking at the existing banners, wondering what the new ones might look like.  They’re the first ones with the new logo and colors that the team introduced for the 2015-16 season.

If I had to guess, the Calder Cup Championship banner will be in the style of the current one, with the 2013 championship logo swapped out for the 2017 version.  I’m less certain about the Western Conference Champion banner, though.  A black version of the previous banner style?  Will the logo still inexplicably be in an oval?  Will the Calder Cup banners be grouped together or will everything remain chronological.

I think it’s an opportunity to revamp the banners in general and, following what I proposed back in 2013, this is what I suggest now: 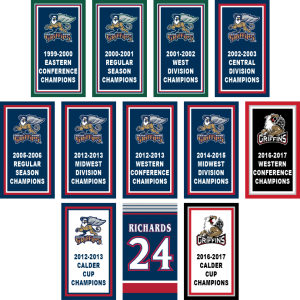 The new banners follow the style I outlined four years ago, with coloring and striping based on the current jersey designs.  And, just as was the case four years ago, I know the number font on Travis Richards’ retired jersey number isn’t quite right.

While I would prefer to see these banners actually hanging from the rafters, I know the team doesn’t do that, so I imagine that first set on the east side of the service walkway, the second set on the west side, with the Calder Cup and retired number banners in the middle.  You could do five on the east and four on the west but I think there’d be a weird kind of symmetry having one of the “wrong” banner style in each set.

Of course, I don’t expect my idea to be used.  We’ll just have to see what they actually do on October 6.