The team didn’t even get a chance to make an announcement before TSN’s Bob McKenzie was on top of it.

As I wrote earlier today, I don’t dislike the deal but I don’t love it.  I would have liked Daley a lot more five years ago but he’s still a steadying presence on a young blue line.  The problem is that we know Niklas Kronwall or Jonathan Ericsson isn’t going to sit, so he’s also taking a spot from one of those young players who need steadying.

The $3.178 million cap hit is better than the $4.5 million that had been reported earlier in the day but comes at the cost of being a three-year deal.  That’s not awful. 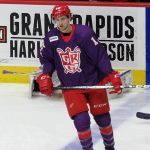