Joe Louis Arena is a dump.

Everyone knows it, everyone says it.  And it always has been.

As we come to the final weekend of Detroit Red Wings games at the Joe, there is plenty of reflection to go around.  Best moments at the Joe.  Best memories of the Joe.

I was asked to participate in a roundtable for Puck Daddy (to be published this weekend).  I talked a bit about visits to Joe Louis Arena as a kid in the late 1980s and early 1990s.

Growing up, when I skated indoors it was at places like Optimist Arena in my hometown of Jackson (back before the second rink went in).  I never played hockey competitively, but sometimes followed my cousin around to similar venues across the state.  The biggest arena I ever saw before going to the Joe was Muskegon’s L.C. Walker Arena – then about 25 years old and seating a little over 5,000 people.

I thought hockey arenas were supposed to be masses of concrete and steel.  Windows?  What for?  The shiniest thing in the building should be the ice.  Comfort?  Who cares, you’re there for the hockey.

I went to many games at the Joe growing up but my first game in another NHL arena was February 28, 2003, as the Buffalo Sabres hosted the Dallas Stars in what would be a 5-3 win for the home team.  I remember walking the concourses – plural! – of what was then HSBC Arena before the game, astounded by how clean and spacious they were.

I knew the Joe was a dump by then, and I’d seen what modern NHL arenas looked like, but this was my first time experiencing one live.

Then we got to our seats in the 300 level and I remember being shocked again, this time by how far away the ice felt.  A feeling I’ve never had at the Joe, I would come across it again in Columbus and Tampa and Sunrise.

I’m sure modern arenas can be built without removing fans from the action.  Apparently they’ve done it in Montreal and they’re trying to do it at Little Caesars Arena.  But I digress.

Joe Louis Arena is a dump.  Everyone knows this.

But if you don’t know that, it’s a shrine.  A municipal rink at massive scale.  Tons upon tons of exposed concrete, some of it sticky.  It’s a place of odd smells, where the brightest spot is the ice and the players skating on it.  Where it’s not about intermission games or light shows or other comforts that have become standard.  It’s about watching the game.  It’s a hockey rink, not an entertainment palace.

Maybe – in some ways – that’s how it should be.

Looking Up at the Joe Louis Arena Rafters

I've been working on a new feature for DetroitHockey.Net on and off for a couple months now and maybe it's appropriate for it to launch just two days after a group of fans had to be removed from the Joe Louis Arena rafters. 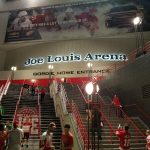 Some of my memories from Joe Louis Arena.