Per Gregg Krupa of the Detroit News, the Red Wings will be placing Drew Miller on waivers at noon today to make room for the return of Niklas Kronwall from injured reserve.

My understanding of waivers was that the player had to have cleared before his roster spot opened up, so I’m a little confused here, but I could just be misunderstanding.

Either way, it’s not the move I expected or preferred, but it’s acceptable.  I expected Ryan Sproul to get waived, as he’s the odd-defenseman-out.  I would have liked Steve Ott to get waived, but he can’t be while he’s on injured reserve.  It’ll be interesting to see if someone takes a flier on him or if he ends up in GR.

Per Winging it in Motown, a player can still be on the roster but not count towards the limit if they’re on waivers. This seems weird to me because there are cases where a player has played while on waivers.  Maybe it’s a case-by-case basis or something. 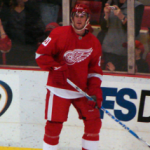 Drew Miller has agreed to a one-year contract with the Detroit Red Wings, the team announced today.

Kronwall, Miller Out with Knee Injuries

The Detroit Red Wings announced on Tuesday that defenseman Niklas Kronwall will miss two to four weeks with a knee injury.

Canada's TSN reported on Thursday that the Detroit Red Wings have agreed to a five-year contract extension with defenseman Niklas Kronwall. The deal is reportedly worth $15 million.