Earlier today, Helene St. James of the Detroit Free Press posted a piece about how, once the Wings get healthy, guys like Gustav Nyquist, Tomas Tatar, and Riley Sheahan need to be benched because they’re not producing as expected.  She then engaged readers via Twitter, repeating her argument while also stating that Steve Ott has been a great signing for the Red Wings.

I Tweeted a little bit about it but I want to sum it up here.

As far as Nyquist (and probably Tatar and Sheahan) goes, I won’t deny that the Wings probably had higher hopes for him, especially with the contract that they gave him.  That said, Prashanth Iyer of Winging it in Motown does a great job of explaining that Nyquist’s production is solid by certain metrics.

When asked about Steve Ott, HSJ said the following:

I’m not an Ott fan. I was confused by his signing on Day One.  Last week the beat writers were all over how great Ott is for his fight sparking the Red Wings to a win, which is confusing correlation with causation.

If Ott was brought to Detroit to fight and provide a spark, here’s what we know:  Ott has fought five times this season.  The Red Wings are 2-2-1 in those games.  In the minutes played after his fight in each of those games, the Red Wings have scored 13 goals and allowed 13 goals.

In short, the impact of a Steve Ott fight on the outcome of a game this season is completely neutral.  You could argue it’s a negative, even, if you take that overtime loss as just a loss.

But if we’re going to take salary into account, let’s say that instead of Ott, the Wings had a guy who was making just over $800k and put up at a 15-goal, 15-assist pace last season while playing about 11 minutes per night.  Would you say that’s the kind of guy you could play in the bottom six or you could bump up to the top six if you felt like you need to cut the minutes of Nyquist/Tatar/Sheahan?  I think so.

Of course, those numbers belong to Teemu Pulkkinen, abandoned by the Red Wings and now skating for the AHL’s Iowa Wild.

I realize that most fans - most players, even - don't care about sweater numbers a whole lot. I do, though, so I've been thinking about what hoops would need to be jumped through to get the Red Wings' recent acquisitions assigned numbers that are familiar to them in Detroit. 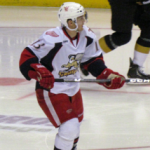 Nyquist the Odd Man Out Up Front

According to MLive's Ansar Khan, Red Wings head coach Mike Babcock has his lines set for the start of the abbreviated 2013 NHL season and they do not include Gustav Nyquist.