The Red Wings are getting some bodies back, as three players will return from injury tonight.

Goalie Jimmy Howard, defenseman Alexey Marchenko, and forward Andreas Athanasiou will all be in the lineup as Detroit starts a five-game homestand against the Columbus Blue Jackets.

With Howard – who will back-up Petr Mrazek tonight – and Athanasiou back, Jared Coreau and Tomas Nosek returned to the Grand Rapids Griffins.  Brian Lashoff remains with the Red Wings but will likely be a healthy scratch in place of Marchenko.

Stupid Stat of the Day: The Red Wings have never lost in regulation to the Blue Jackets in December at Joe Louis Arena.  The last meeting between the teams in December in Detroit was a 1-0 shootout win for Columbus.

Looking to stop a three-game skid, the Detroit Red Wings host the Columbus Blue Jackets tonight. Columbus is on a tear, having won their last six games. 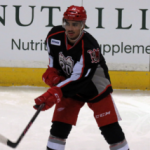 The Red Wings get one player back and possibly lose another on Sunday as they host the Western Conference leading Dallas Stars.