On the positive side of things, Tomas Jurco was re-called from his rehabilitation stint with the Grand Rapids Griffins, where he had a goal and an assist – along with six penalty minutes – in two games played.  He wore #13 in Grand Rapids with his old #28 having been taken by Matt Lorito this season.

Jurco will have a chance to slide into the Detroit lineup immediately in part due to an injury to Tyler Bertuzzi.

Bertuzzi left Saturday’s matchup with the Montreal Canadiens with a high ankle sprain after a hit by Alexei Emelin.  He’s expected to miss three- to five- weeks.

Both Bertuzzi and Smith were placed on the seven-day disabled list while Jurco came off long-term injured reserve.  As of today, the Red Wings have seven players on various forms of IR: Andreas Athanasiou, Johan Franzen, Darren Helm, Joe Vitale, Alexey Marchenko, Jimmy Howard, Bertuzzi, and Smith, though neither Franzen or Vitale are expected to play this season.

The team will go with six defensemen for now, with no call-up planned to replace Smith.

Over the weekend, the Red Wings called up goalie Jared Coreau after Jimmy Howard left Friday’s win over the New Jersey Devils with a groin injury.

Gustav Nyquist joined the long list of the Red Wings' walking wounded today, as it was revealed that he is day-to-day with a groin injury.

The Detroit Red Wings announced updates to the injury status of both Mikael Samuelsson and Jimmy Howard on Wednesday. Both were injured during Tuesday's morning skate in Nashville, though Howard was briefly in the game. 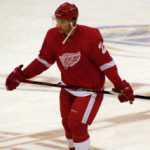 Khan reports that Brad Stuart will return to the Detroit lineup on Wednesday. Stuart hasn't played in over a month after suffering injuries to his ribs and back while crashing head-first into the boards in Phoenix.