Alright, I’m going to make this one quick because, admittedly, I was mostly watching this out of the corner of my eye with the volume down low.

You know when the Red Wings were a powerhouse and they’d come up against some random horrible team who, for some reason, they just couldn’t beat?  Those games against Nashville (usually in Nashville), 1999ish, where they doubled up the Preds in shots and controlled play and just couldn’t solve frikkin’ Mike Dunham, while some random like Mark Mowers (future Red Wing) would score goals on multiple deflections and Detroit would lose, 2-1?

By all accounts, the Red Wings had no right to win this game.  The Rangers controlled play for the most part.  But Jimmy Howard – in his first start of the season and playing in his favorite arena – stood on his head and the Wings managed to get another power play goal out of Thomas Vanek and a goal from their fourth line and it was enough.

It wasn’t a good game but a win is a win.

Compare Wednesday's game against Vancouver and tonight's matchup vs. Nashville and it'd be tough to believe they featured the same Red Wings team. 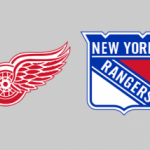 Pavel Datsyuk makes his return to the Detroit lineup tonight as the Red Wings host the New York Rangers. He's missed 19 games with a broken hand.