Mitch Callahan, Eric Tangradi, and Brian Lashoff come as no surprise, as they all cleared waivers last year and spent the season (aside from a brief call-up for Tangradi) in Grand Rapids.

Martin Frk seems to be a victim of the Red Wings deciding to keep eight defensemen on the roster while Niklas Kronwall recovers from injury.  With eight blueliners, there’s only room for 13 forwards, leaving Frk out.

Nick Jensen has lost the battle for the final spots on the blue line, as it would seem the seventh and eighth spots have gone to Xavier Ouellet and Ryan Sproul.

If I had to guess, Jensen will be claimed.  Frk might be as well, but I thought there was no way Landon Ferraro and Callahan would make it through in 2014 so what do I know? 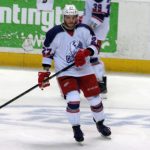 The Red Wings lost forward Martin Frk to the Carolina Hurricanes via waivers on Sunday. 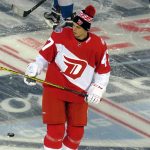