As expected, the Red Wings announced this morning that defenseman Ryan Sproul has re-signed with the team.

UPDATE: The Detroit #RedWings and D Ryan Sproul have agreed to terms on a two-year deal. pic.twitter.com/KYBW8ceIGA

With the deal, the Wings’ last restricted free agent is signed on the eve of training camp.

That it’s a two-year deal is interesting to me.  This is a guy who has to be exposed to waivers if he doesn’t make the club, is seemingly behind Xavier Ouellet in that regard, and will likely be claimed if he is waived.  This deal will almost certainly be paid by another team.  Why give them another year?

I don’t know.  If it were up to me, Sproul’s rights would have been traded months ago so they don’t lose him for nothing.  We’ll see what happens.

Update, 9:30 AM: This might explain the need for a two-year deal.

By going for two years, Sproul is guaranteed a one-way contract for the 2017-18 season, wherever he ends up playing. 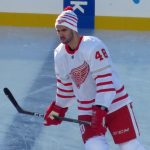 Detroit defenseman Ryan Sproul will miss the rest of the season with an ACL injury. 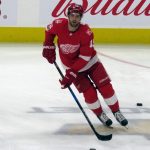 The Red Wings made two deals on Saturday night, sending Riley Sheahan to Pittsburgh and Ryan Sproul to the Rangers.