One year after changing their logo, colors, and jerseys, the Grand Rapids Griffins are updating their road black sweater once again.

Via Twitter, Alex Gerwitz sent the find to SportsLogos.Net, among others.

@sportslogosnet Haven’t seen this reported. According to #NHL17 the @griffinshockey are tweaking their dark jerseys. More red, less silver. pic.twitter.com/FWGG1JF13d

Drew Behringer pointed out that the Griffins’ online store also features an updated version of the dark jersey.

The placement of the red and silver stripes has been swapped from the version worn for the 2015-16 season.  Additionally, the team’s 20th anniversary logo has been replaced on the left shoulder by the “GRG” shield, though that was expected (and has been mirrored on the white sweater).

Personally, I preferred the original version. That said, I still dislike these colors and the new logo. 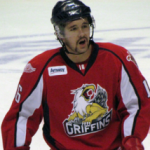 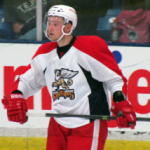