The National Hockey League announced today that Team Sweden has replaced injured defenseman Niklas Kronwall of the Red Wings with Hampus Lindholm of the Anaheim Ducks for the upcoming World Cup of Hockey.

The news comes as somewhat of a surprise as, while Kronwall had been recovering from a knee injury, Detroit general manager Ken Holland declared in an interview on NHL.com yesterday that, “I talked to Kronwall the other day and he feels a lot better.”

Obviously “better” is a relative term.  If I were the Swedes, I’d rather have Lindholm than Kronwall anyway, so they might be taking advantage of Kronwall’s past injury to make that switch. 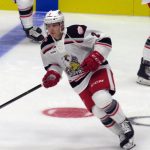 On Hicketts, DeKeyser, and Kronwall

Thoughts on the possibility of the Red Wings calling up Joe Hicketts with Danny DeKeyser injured.

Detroit Red Wings defenseman Niklas Kronwall has been suspended for one game, the National Hockey League's Department of Player Safety announced on Tuesday.

Detroit forward Henrik Zetterberg will not play for Sweden at the upcoming World Cup of Hockey.