The Detroit Red Wings and the National Hockey League announced the schedule for the 2016-17 season on Tuesday, the final campaign to be played at Joe Louis Arena.

The final regular season home game will be on April 9, 2017, with the Red Wings hosting the New Jersey Devils.

In between, Detroit faces sixteen sets of back-to-back matchups. Five of those sets put the Red Wings facing off twice in less than 24 hours, while all but three of them do not require the team to travel between games.

Highlights to the schedule include a home-and-home against the Ottawa Senators on April 3 and 4, hosting the Montreal Canadiens in a Martin Luther King Jr. Day matinee on January 16, and visiting the Toronto Maple Leafs outdoors at BMO Field for the Centennial Classic on January 1.

The National Hockey League's labor situation may cause the partial or complete cancellation of the 2004-05 season but if it is played, the schedule of games is set. The league announced its schedule for the upcoming season on Wednesday, following a tradition of making the announcement the day after Major League Baseball's All-Star Game. 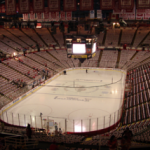 The Detroit Red Wings announced their schedule for the upcoming 2005-06 National Hockey League season on Wednesday.