Sheahan, 24, is coming off of his second full season with the Red Wings. He scored a career-high 14 goals in 81 games but saw his total production drop to 25 points after putting up 36 over the 2014-15 campaign.

Sheahan was one of twelve players in the Red Wings’ system scheduled to become a restricted free agent this summer. He’s the third of the group to sign, with Brian Lashoff agreeing to terms on a two-way deal with the club earlier this week and Tomas Nosek signing for two more years in late May.

The Detroit Red Wings announced on Monday the signing of restricted free agent forward Tomas Tatar to a three-year deal. 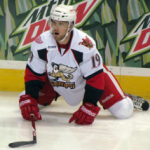