Previously known as the Detroit Events Center, the arena is scheduled to open for the 2017-18 NHL season.

The naming rights deal is a curious one, as the Ilitch family owns both the Red Wings and Little Caesars, so in essence they’re paying themselves $120 million over 20 years.

I’m less-than-impressed by all of it but I recognize that it could have been worse. Little Caesars is a perfectly acceptable brand to be attached to – better than Amway, for example – but it’s doesn’t quite have the pull of Honda or American Airlines or United or Verizon.

If the Ilitch family was just going to end up getting no money for the naming rights anyway, why not go with Gordie Howe Arena or Olympia Arena or something like that? Via Twitter, Winging It in Motown’s J.J. suggested that there might be issues between Olympia and Little Caesars that drove the naming deal.

I wonder if the Ilitch empire is under threat of being split & the 20-year naming rights is a way to make Olympia & Little Caesars play nice
— J.J. (@JJfromKansas) April 28, 2016

I actually wonder if it’s more a matter of Olympia and Little Caesars about to no longer be related. Locking up the arena’s naming rights for 20 years just before selling off Olympia Entertainment would be a smart thing for the Ilitch family to do.

In addition to feeling underwhelmed by the name (if Little Caesars was going to be the sponsor, I’d have loved to see them go with Little Caesars Coliseum), I’m disappointed in the logo. The Little Caesars wordmark is to be expected. “Arena” in all lowercase below it is somewhat inexplicable. The mark at the top of the logo… Is that supposed to be a hockey puck? How generic. The shape of the arena? Too abstract. A pizza? Doesn’t look like one to me. It feels like clip art to me.

But there we have it, the new arena name. Little Caesars Arena. 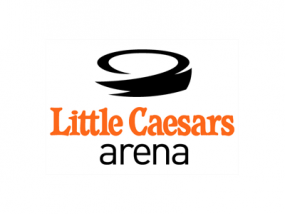 Knowing that Pavel Datsyuk‘s time with the Detroit Red Wings is probably over, it’s kind of hard to look at the team’s 1-0 loss in the context of anything but that.

To me, the most telling thing about this game was the first period. In a must-win game, with an early five-on-three, the Red Wings didn’t even look threatening with a two-man advantage. They got better throughout the game, but that was just a brutal start, a wasted opportunity, and it set the tone for the rest of the night. It could just have easily been the Red Wings getting a lucky bounce to break the tie late as it was the Lightning, but there wasn’t the same feeling of expectation. The Lightning took advantage of their opportunities. The Red Wings didn’t.

Is this the end?

With a loss, the Red Wings’ season comes to a close with just a single playoff victory to their credit for the second time in three years.

With a loss, Pavel Datsyuk‘s NHL career could end.

Win and force a Game Six at home. Maybe all that does is give Datsyuk a proper send-off. Maybe it’s the start of something more. A win opens up possibilities. A loss is the end.

I’m not sure if the Red Wings deserved better than a 3-2 loss last night in Game Four against the Lightning, but I can’t shake the feeling that Tampa deserved worse.

The Lightning controlled the first ten minutes of play and scored their first power play goal in that time. But after that, they really didn’t threaten much outside of the power plays. The Red Wings started to come on, also didn’t threaten a whole lot, but it felt like they controlled the puck more (I’m not looking up the stats to back this up, this is eyeball analysis only). That carried through the second period and then the Red Wings turned it on to start the third and seemed to be in control until Tampa’s third and final power play goal, the eventual game-winner.

It was the penalty kill that doomed the Red Wings. On the three tries with the man-advantage where the Lightning scored, they moved the puck at will. The Wings just looked lost out there. And you just can’t do that. If you’re going to concede so much on the PK you’d better be making up for it on the power play and, once again, they didn’t.

With so much emphasis on special teams, you’re going to get some focus on the reffing standard, which was pretty atrocious. Tampa Bay scored during a penalty to Justin Abdelkader that was deserved, but then plays that were just as bad in the following minutes were allowed. The goalie interference call to Gustav Nyquist in the second period was an absolute joke. Then you have the cross-checking penalty to Jonathan Ericsson on which the Lightning scored the game-winner. Soft. Technically the right call, but in the context of what had been allowed all game, surprising. It’s hard to believe that the refs chose the final minutes of a tied playoff game to put their foot down and say “Enough is enough” about that play. Of course, it doesn’t matter if the Wings’ PK wasn’t a disaster.

So they’re left having to win three in a row, two on the road, against a team they’ve won one of four against so far. It’s a tough spot to be in. I don’t think they’ll do it.

So after the first two games I asked whether or not the Lightning were afraid of the Red Wings. After Game Three, they should be.

Whether it was coming home to Joe Louis Arena, the lineup changes, a general wakeup call, or something else, Detroit seemingly flipped a switch. They didn’t look quite as dangerous as I’d like offensively but defensively they shut down Tampa’s top line – a line that has given them fits for two years – and exposed their lack of depth. Aided by the fact that Petr Mrazek had a pretty great game in his return to the crease.

And they needed to. It was a virtual must-win. As is Game Four on Tuesday, with the Wings needing to hold serve.

There might be stats that show that this game was close. I don’t know, I turned my TV off once it was over and I’m not looking it up. At the very least, the Wings had a good amount of shots, so based on that you might say they were right in it until the end.

But lets be serious here: The Lightning – without Stamkos, without Stralman – have yet to have a reason to be afraid of the Red Wings. If you’re a Wings fan (and if you’re reading this, I imagine you are), you’re probably holding your breath every other shift that Tyler Johnson spends in the Detroit zone. But if you’re, for some reason, a Lightning fan, is there anyone or any line or any situation that worries you like that?

The Red Wings just don’t look like a threat out there.

That said, they always say it’s not a series until one team wins on the road. Nevermind the fact that the Wings will lose the series if they only win at home, but we come back to Detroit for Game Three on Sunday and with home ice the Red Wings have a chance to get right back in the series.

I don’t know. I see people saying the Red Wings’ 3-2 loss to the Lightning in Game One was close and hard fought but I’m not feeling it.

Sure, the score was close and there were battles. Plenty of hits to go around. Decent number of shots for both teams. But there were only one or two shifts where I felt like Detroit was really threatening. Their goals came on perimeter shots. They got a couple chances from the slot but weren’t moving the puck there with any regularity.

Maybe I’ve been worn down by this season but, even though the stats might call it close, I don’t see it. I’m going to need more from the Wings to consider them a threat.