Mantha, 21, will make his NHL debut on Tuesday as the Red Wings visit the Philadelphia Flyers. In doing so, he will become the 900th player in franchise history.

Selected in the first round (20th overall) of the 2013 NHL Entry Draft by Detroit, Mantha has 45 points in 56 games for the Griffins in his second professional season, good for third place on the team.

Detroit head coach Jeff Blashill had previously stated that Mantha would only be called up if he could slot in on one of the top two lines. As the team says there are no injuries to announce, it is not yet clear where Mantha’s spot in the lineup is.

Mantha’s promotion is unrelated to a knee injury suffered by defenseman Niklas Kronwall during Saturday’s comeback win over the New York Rangers. The Red Wings have said that a blueliner will be called up for the team’s upcoming four-game road trip but that move has yet to be announced. 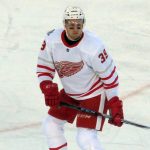 On Benching Mantha and Learning Lessons

The Red Wings called up Tyler Bertuzzi and put Thomas Vanek on LTIR on Monday.