Tomas Jurco scored his first goal of the season and Detroit goalie Jimmy Howard stopped 38 of 40 shots but it wasn’t enough for the Red Wings, as they dropped a 3-2 shootout decision to the Washington Capitals on Tuesday night.

The Red Wings blew yet another third period lead en route to the loss, as Alexander Ovechkin banged home a loose puck at the edge of the crease on the power play with 9:09 left in the third to tie the game, 2-2. The Red Wings challenged the goal, claiming that T.J. Oshie interfered with Howard while crashing the net, but the call on the ice stood.

Oshie and Evgeny Kuznetsov would go on to score in the shootout while neither Gustav Nyquist nor Pavel Datsyuk could beat Washington’s Braden Holtby.

The Capitals had opened the game’s scoring just 43 seconds into the game. After a Detroit turnover in their own end, Kuznetsov got a shot off that Howard stopped but Justin Williams dove to poke the rebound past Howard, off the post, and in.

With 4:20 left in the period, Henrik Zetterberg tied things up. Off a faceoff win in the Capitals’ end, Dylan Larkin controlled the puck on the right wing boards and threaded a pass through traffic to Zetterberg for a tip-in from the slot.

Jurco gave the Red Wings the lead at 3:16 of the second period. Off a dump in, Joakim Andersson won a battle for the puck behind the net and sent it out front to Jurco all alone to make a quick move and lift a shot past Holtby.

Holtby finished the night with 21 saves on 23 shots.

Ovechkin’s tally was the only power play marker of the game. Washington had five chances with the extra attacker to Detroit’s one.

The Red Wings will return to action on Thursday when they host the Montreal Canadiens.

Andersson’s assist on Jurco’s goal was his first point of the season. Every skater who has appeared in a game for the Red Wings this year now has at least one point. 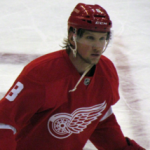 Johan Franzen scored twice and added an assist on Friday night but it wasn't enough for the Detroit Red Wings, who dropped a 4-3 shootout decision to the Washington Capitals.