Kindl went end-to-end, blowing past all three Toronto defenders and breaking on on goalie James Reimer, then lifting a shot over Reimer’s shoulder to seal the victory.

The victory was Detroit’s third in a row, marking just the second time in the season that they have been able to string together three consecutive wins.

Captain Henrik Zetterberg opened the game’s scoring for the Red Wings. With 3:39 left in the first period, Zetterberg flung a shot from the blue line at Reimer. Somehow the puck trickled through and across the goal like for Zetterberg’s 300th career goal.

With 1:02 left in regulation, Dion Phaneuf tied things up when the Leafs got a fluky goal of their own. Phaneuf sent the puck into Detroit goalie Petr Mrazek‘s crease and it fluttered through the air, where Mrazek inadvertently knocked it into his own net off the knob of his stick.

Mrazek finished the night with 32 saves on 33 shots. Reimer stopped 22 of 25 chances.

Neither team scored a power play goal in the game. Detroit had three tries with the extra attacker to Toronto’s four.

The Red Wings are back in action on Sunday when they host the Dallas Stars.

Detroit forward Landon Ferraro left the game in the first period after a lower-body injury.

Detroit's Johan Franzen scores two goals on Friday night before leaving the game with leg spasms, and his teammates added two more as the Red Wings rolled to a 4-1 win over the host Toronto Maple Leafs. 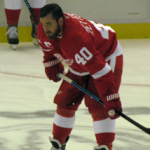 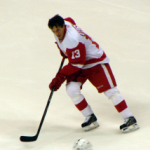