Detroit’s Henrik Zetterberg notched a pair of milestones on Saturday night, helping the Red Wings to a 5-3 win over the Ottawa Senators.

With 7:05 left in the opening period, Tomas Tatar snapped a shot from the right faceoff dot past Ottawa goalie Craig Anderson. Zetterberg earned the secondary assist on the power play goal, his 500th career NHL assist.

Another power play goal made it 2-0 at 5:29 of the second. Gustav Nyquist tipped a Zetterberg shot/pass in the slot through traffic and past Anderson, Zetterberg’s 800th career point.

Kyle Turris cut Detroit’s lead to a single goal with 6:24 left in the middle frame, putting the rebound of an Erik Karlsson shot from the point past Red Wings’ netminder Petr Mrazek.

With 1:55 left in the period, Jonathan Ericsson‘s blue line blast of a faceoff win by Darren Helm made it 3-1.

Dylan Larkin scored just 39 seconds into the third period to make it 4-1. When Anderson came out to his right to challenge Larkin cutting to the net, Larkin raced around the back of the goal and tucked it in the open side.

Danny DeKeyser rounded out Detroit’s scoring at 5:35 of the third, taking a Nyquist drop-pass on a rush and snapping a shot from the left circle past Anderson.

With 4:09 left in regulation, Mark Stone gloved down an attempted clear in the Detroit slot and beat Mrazek to make it 5-2.

Bobby Ryan made it 5-3 with 1:09 left, skating in untouched as the Red Wings scrambled after a turnover to take a pass in the slot from Shane Prince and snap a shot past Mrazek.

Mrazek finished the night with 33 saves on 36 shots. Anderson stopped 23 of 28 Detroit chances.

Each team had three power plays on the night. Ottawa did not score with the man-advantage but the Red Wings scored twice with the extra attacker.

After splitting the home-and-home series with the Senators, the Red Wings are now off until Tuesday when they host the Tampa Bay Lightning. 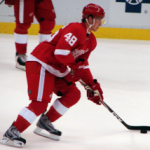 Rookie Cory Emmerton made his case for staying in the Detroit lineup Friday night, notching a goal and an assist as the Red Wings rolled to a 5-3 win over the visiting Ottawa Senators.