In a preseason battle of “B” teams, Detroit’s youth led the Red Wings to a 6-1 win over the Pittsburgh Penguins on Thursday night.

Both Detroit and Pittsburgh iced lineups devoid of many of their top stars. Pittsburgh was without Sidney Crosby and Phil Kessel while the Red Wings went without Henrik Zetterberg, Brad Richards, and most of their regular regular blueline corps.

Tyler Bertuzzi opened the scoring for Detroit with 6:37 left in the opening period, slipping a shot through Pittsburgh netminder Matthew Murray that just made it across the goal line.

With 3:16 left in the period, Dylan Larkin put the rebound of a Teemu Pulkkinen chance into the open side of Murray’s net on a five-on three.

Just 1:27 later, Pulkkinen snapped a shot from in close over Murray’s shoulder to make it 3-0 with another power play goal.

Pulkkinen added his second just 1:08 into the third, taking a feed from Bertuzzi to break down the right wing and snap a shot past Murray for a 5-0 lead.

Beau Bennett ended the shutout bid with 9:16 left in regulation, putting a rebound chance past Detroit netminder Jimmy Howard off a net-front scramble.

Larkin rounded out the scoring with ten seconds remaining, whipping a shot from the bottom of the left circle past Murray off a quick passing play.

Howard finished the night with 34 saves on 35 shots. Murray made 21 saves on 27 Detroit chances.

The two teams played a three-on-three overtime after the game as a test run of the NHL’s new tiebreaker format. Pittsburgh scored a late shorthanded goal to end it.

Tomas Tatar scored three goals for the Red Wings, leading Detroit to a 4-1 win over the Chicago Blackhawks in their exhibition home opener. The win came one night after Detroit fell to the Blackhawks in overtime in Chicago

Tatar opened the game’s scoring with 8:30 left in the first period, working a quick give-and-go with former Blackhawk Brad Richards before snapping a shot from the slot past Chicago goalie Corey Crawford.

With 5:31 left in the second, Andrew Shaw tied things up, snapping a shot from the left faceoff dot through a screen by Bryan Bickell on a Chicago power play and beating Detroit netminder Jared Coreau, who replaced starter Petr Mrazek midway through the game.

Just 1:36 later, Justin Abdelkader took a long feed from Niklas Kronwall to break in all alone and beat Michael Leighton for a power play goal, restoring the Detroit lead.

Tatar’s second made it 3-1 at 4:24 of the third period, as he banged home a loose puck in the crease after Richards threw it on net.

With 1:34 remaining, Tatar completed the hat trick with an empty net goal.

Each team finished the night with a power play goal. Chicago had six tries with the extra attacker while Detroit had four.

Mrazek stopped all 16 shots he faced in net for the Red Wings in 29:23 of play. Coreau made 14 stops on 15 shots over the remainder of the game. Crawford stopped seven of eight shots in 30:35 while Leighton went 14-for-16 to close things out.

The Red Wings will play their third game in as many nights tomorrow when they host the Pittsburgh Penguins.

The Detroit Red Wings dropped a 5-4 overtime decision to the Chicago Blackhawks on Tuesday night to open their 2015 exhibition schedule.

Featuring a team made up mostly of players destined for the Grand Rapids Griffins against a large NHL contingent playing in front of their home crowd, Detroit rallied from a 4-1 third-period deficit to force overtime before Trevor Daley scored to give the Blackhawks the win.

Detroit’s trio of Dylan Larkin, Anthony Mantha, and Nick Jensen sustained pressure in the Chicago end on the second shift of overtime but Larkin was tripped and took down Mantha, leading to a three-on-one against Ryan Sproul – who had come on for Jensen – for the Blackhawks. Patrick Kane moved the puck to Artem Anisimov who moved it on to Daley for an easy snap past Red Wings’ goalie Tom McCollum at 1:40 of the extra period.

The Blackhawks had opened the game’s scoring 7:16 in, when Kyle Baun batted the mid-air rebound of a Ryan Garbutt chance past Jimmy Howard, who started the game in net for Detroit.

Jonathan Toews made it 2-0 just 1:08 later, snapping a shot from the top of the left circle past Howard.

Chicago’s power play gave the Blackhawks a 3-0 lead at 6:24 of the second period, as Howard stopped Toews’ initial shot was blocked aside by Howard but Teuvo Teravaninen put the puck back between the Detroit netminder’s pads from in close.

Mantha got the Red Wings on the board with 5:05 left in the middle period, beating Mark Visentin from the slot off a feed from Andy Miele. Visentin had replaced started Scott Darling midway through the period.

Garbutt restored the Chicago lead at 2:39 of the third period, capitalizing on a turnover by Brian Lashoff and a mental mistake by Sproul to step up and snap a shot past McCollum. Sproul appeared to think the play was offsides and made no move to challenge Garbutt as he jumped into the zone.

Riley Sheahan started Detroit’s comeback at 5:58 of the third, tipping a Nathan Paetsch shot past Visentin to make it 4-2.

With 7:07 remaining, Teemu Pulkkinen made it 4-3, crashing the crease to get to the rebound of a Miele chance and shovel it into the open side of the net.

Luke Glendening tied things up on a power play with just 2:05 remaining, gathering up the rebound of an Andreas Athanasiou chance and lifting it past Visentin from the edge of the crease.

Each team finished the night with a power play goal. Detroit had three chances with the extra attacker to Chicago’s four.

Howard stopped 18 of 21 shots he faced and McCollum made 14 saves on 16 shots for the Red Wings. Darling was perfect on 22 shots while Visentin stopped 12 of 16 for the Blackhawks.

The two teams will meet again on Wednesday in Detroit, with the Red Wings expected to dress a mostly-NHLer lineup and the Blackhawks icing a prospect-heavy team.

With none of their usual leaders in the lineup, Drew Miller, Riley Sheahan, and Luke Glendening wore alternate captain’s As for the Red Wings. 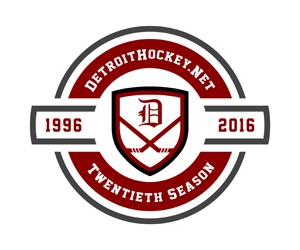 The contract is reportedly a two-way deal for $950,000. The entire amount of the contract would come off of the Red Wings’ salary cap if Cleary were assigned to the Grand Rapids Griffins of the American Hockey League.

Cleary, 36, is coming off a season that saw him play just 17 games, scoring a goal and an assist while on a contract that paid him $2.5 million.

The deal is reportedly the result of a handshake agreement between Cleary and Detroit general manager Ken Holland two years ago. Supposedly, at the urging of then-head coach Mike Babcock, Holland promised Cleary a series of one-year deals to match the three-year offer he was rumored to be mulling from the Philadelphia Flyers. Such an agreement, however, is expressly forbidden by the collective bargaining agreement between the NHL and the NHLPA.

With the signing, the Red Wings now have 20 forwards who would have to clear waivers to be sent to the Griffins to start the season, though two of those players are Andy Miele and Eric Tangradi, who were specifically signed for Grand Rapids. Another, Louis-Marc Aubry, is unlikely to get a shot with the Red Wings. This leaves Cleary, Joakim Andersson, Landon Ferraro, and Mitch Callahan fighting for the final roster spots.