Just before free agency opened across the National Hockey League, the Detroit Red Wings locked up two pieces of their American Hockey League affiliate’s run to the Western Conference Finals.

Miele, of Grosse Pointe Woods, led the Griffins in scoring during the 2014-15 season, his first with the team. His 26 goals and 44 assists for 70 points in 71 games were second-best in the AHL.

In 280 career AHL games, mostly with the Portland Pirates, Miele has 88 goals and 161 assists for 249 points. He has two assists in 15 career NHL games, all with the Phoenix Coyotes.

McCollum, 25, went 19-11-7 for the Griffins and helped carry the team after previous starting goalie Petr Mrazek was called up to the Red Wings. Originally drafted by Detroit 30th overall in 2008, McCollum earned his first NHL win in relief of Mrazek against Buffalo on January 18.

The Griffins did lose one veteran on Wednesday as Kevin Porter signed a two-way deal with the Pittsburgh Penguins.

The Detroit Red Wings announced the signing of forward Tomas Jurco to a two-year deal. 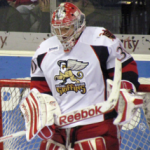