The Detroit Red Wings announced on Tuesday the buyout of the remaining three years of forward Stephen Weiss‘ contract.

Because of the no movement clause in his deal, Weiss did not have to go on waivers prior to being bought out. As such, the Red Wings had until 5:00 PM on Tuesday to make the decision.

Weiss signed a five-year, $24.5 million contract with the Red Wings on July 1, 2013. He spent much of the first year of that deal on injured reserve, playing only 26 games. He made it into 56 games last season. Over two years, he scored 11 goals and added 18 assists for 29 points.

The buyout will cost the Red Wings two-thirds of his remaining salary over twice the length. That works out to $1.066 million for the next two seasons, $2.56 million in 2017-18, and $1.67 million for three more years.

It is the first non-compliance buyout by Detroit since the NHL implemented a salary cap in 2005.

The Detroit Red Wings announced on Tuesday the assignment of forward Stephen Weiss to the Grand Rapids Griffins on a conditioning stint. 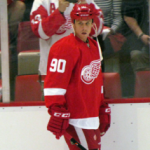 On Stephen Weiss and Expectations

Prior to Stephen Weiss' two-goal performance against the Ottawa Senators last night, Mlive's Ansar Khan penned a note that shouldn't be a surprise but is nonetheless a little interesting.