Detroit entered the day in a three-way tie with the Boston Bruins and Pittsburgh Penguins – all with 95 points in the standings – but holding a game in hand.

The Capitals’ Evgeny Kuznetsov opened the game’s scoring just 3:38 in on a power play. Kuznetsov’s shot from the right wing deflected off of Drew Miller and went over goalie Petr Mrazek‘s shoulder.

Mike Green made it 2-0 at 4:42 of the second period with another shot from the right side that deflected and went off Mrazek’s glove before hitting the back of the net.

Darren Helm got Detroit back in it with 7:01 left in the middle frame, tipping a pass from Pavel Datsyuk past Braden Holtby while on the power play.

Even with a furious finish, the Red Wings were unable to pull even.

Holtby finished the night with 35 saves on 36 shots. Mrazek stopped 26 of the 28 chances he faced.

The Red Wings close out their home schedule on Tuesday when they host the Carolina Hurricanes.

Detroit was without forwards Justin Abdelkader, Tomas Jurco, and Erik Cole, all injured… Jakub Kindl was a healthy scratch on defense. 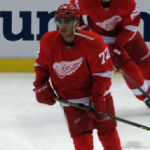 Andreas Athanasiou's first career goal was the only one of the game on Tuesday night, carrying the Detroit Red Wings to a 1-0 win over the Washington Capitals.

Tomas Jurco scored his first goal of the season and Detroit goalie Jimmy Howard stopped 38 of 40 shots but it wasn't enough for the Red Wings, as they dropped a 3-2 shootout decision to the Washington Capitals on Tuesday night.

Johan Franzen scored twice and added an assist on Friday night but it wasn't enough for the Detroit Red Wings, who dropped a 4-3 shootout decision to the Washington Capitals.