Xavier Ouellet will return to the Detroit lineup as Jakub Kindl was injured in practice on Sunday and is now on injured reserve. Brian Lashoff, who had played in Kindl’s slot in Monday’s loss to the Boston Bruins, will be the healthy scratch on defense.

Daniel Cleary and Joakim Andersson will be healthy scratches up front.

Jimmy Howard gets the start in goal for Detroit.

Stupid stat of the day: The Red Wings’ tradition of hosting a New Year’s Eve game began in 1957 and has been interrupted only six times. There were no games in 1994, 2004, or 2012 due to NHL lockouts, 2008 and 2013 due to Detroit’s participation in a Winter Classic the next day, and 1996 due to a Ted Nugent concert at Joe Louis Arena. This is the first time the Red Wings have missed two years in a row in that time. They are 4-0 on New Year’s Eve after missing the previous year in that span.

The Detroit Red Wings visit the New Jersey Devils tonight in just their fifth visit to the Prudential Center. 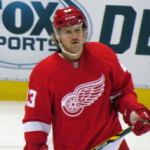