Detroit will ice a lineup that’s as healthy as they’ve been all season, as Brendan Smith returns from IR. Xavier Ouellet was returned to the Grand Rapids Griffins to make room for Smith.

The only player remaining on injured reserve is backup goalie Jonas Gustavsson. Daniel Cleary and Joakim Andersson will be healthy scratches up front while Brian Lashoff is the odd-man-out on defense.

Jimmy Howard will get the start in goal opposite Ryan Miller, brother of Detroit forward Drew Miller. 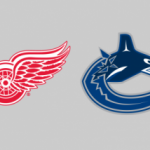 After Delay, Red Wings Down Canucks, 5-3

A 35-minute delay caused by a power failure at Joe Louis Arena didn't slow the Detroit Red Wings down as they cruised to a 5-3 victory over the Vancouver Canucks on Sunday afternoon.

The Red Wings host the Philadelphia Flyers in their "Pink the Rink" night in support of breast cancer awareness tonight. Detroit goalie Jimmy Howard will wear a special mask, pads, blocker and glove as part of the effort.