The Red Wings had waived Nestrasil in an attempt to send him to the Grand Rapids Griffins, clearing a roster spot for the team to activate Stephen Weiss from injured reserve. Weiss is expected to be assigned to the Griffins on a conditioning stint.
In 13 games this season – his first in the NHL – Nestrasil has no goals and two assists. Nestrasil surprised many by making the Red Wings’ lineup out of training camp, beating out Landon Ferraro and Mitch Callahan for the spot opened up by a preseason injury to Pavel Datsyuk. 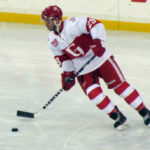 Rookie goaltender Cam Ward led his Carolina Hurricanes as they held off a third-period comeback by the Edmonton Oilers to claim the franchise's first Stanley Cup Championship Monday night.