I saw that and my first thought was, “Wow, imagine if the hockey team had run with that.”

I know it’s heresy to think of the Blackhawks née Black Hawks without their Indian head logo, but an idea kept rattling around in my mind.

I’ve drawn up Winter Classic concepts for the Red Wings before and I did takes on the Dallas Stars’ then-new identity and Team USA’s Olympic jerseys. On my personal blog I’ve talked about designing for a fantasy team and about concepts for the Grand Rapids Griffins.

Taking on the Blackhawks, one of Detroit’s heated rivals, and removing their cherished logo? Yeah, I don’t see this going over well. I wanted to get the idea out of my head though, so here we go.

My initial thought was “What if the Blackhawks had appropriated (or modified) the 86th Infantry’s insignia?” As I started drawing, though, I ran into the problem of what I was putting together was too clean and I was thinking from a 21st century marketing perspective. I decided to treat it as a faux-back. Don’t design for their inaugural year, design something from today that throws back an alternate inaugural year where they had adopted a military theme.

With Chicago in the Winter Classic this year – a game hosted in Washington, DC – it makes some sense to wear something Army-inspired, no matter what this alternate version of the team might be wearing now. So consider this a Winter Classic concept from an alternate universe, perhaps where the Indian head was never used.

I use the “vintage” red, white. and black that I’ve been overusing of late. We start with a black hawk, as seen in the regimental insignia. This hawk also carries a red shield, this one outlined in white (as is the hawk). Rather than the “BH” initials, this shield bears two six-pointed stars, borrowed from the version of Chicago’s flag that would have flown in 1926.

The bird is on a red shield but that’s where things really start to differ, as this shield looks much more like a modern military patch. The two chevrons at the bottom of the shield/patch are meaningless, there because they “look military” (I would have loved it if majors wore chevrons so it could be a reference to McLaughlin but no such luck). An arched black box appears at the top with “Black Hawks” in white. Our world’s Black Hawks featured the team name in their original logo so I figured this version’s would, too. That’s all outlined in black and then white. 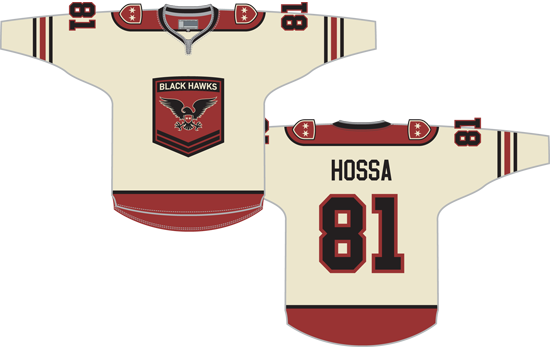 Since the Blackhawks are the road team in this year’s Winter Classic, the sweater design is based off of their first road jersey from our timeline. I changed the collar to black for more contrast and added a black stripe above the red hemline because I hate that the shoulders have a black border but the hemline doesn’t. The name and number are the modern Blackhawks’ font while the shoulder patch is the same shield as appears with the hawk in the crest.

I’m not going to say “Oh my god, they should totally use this!” The Blackhawks have too established of an identity to mess with. For a mental exercise, though, it was fun and I think it turned out okay.

Update – 11/13, 8:50 AM: Hockey Brunch in Chicago tells me that the Blackhawks have sold merchandise based on the 86th Infantry’s insignia before, so apparently basing a concept off of that isn’t as crazy of an idea as I thought. That said, I don’t think it makes using an idea like this any more likely. 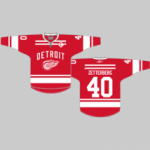 Red Wings' free agent try-out Brett Sopel has signed a one-year deal with the Chicago Blackhawks. TSN.ca reports that the deal is worth $1.5 million.