The Detroit Red Wings scored four goals in the first period on Friday night, rolling past the Los Angeles Kings with a 5-2 victory.

Gustav Nyquist scored two of those markers, both on the power play.

Nyquist opened the game’s scoring at 5:51, beating Los Angeles goalie Jonathan Quick from the slot off a feed from Henrik Zetterberg in the right faceoff circle.

Pavel Datsyuk would make it 2-0 at 9:42, stealing the puck from Dwight King and driving back towards the net. Datsyuk’s attempted pass deflected off Kings’ defenseman Jake Muzzin and past Quick.

Nyquist’s second came just 2:02 later. Niklas Kronwall sent a shot wide of the LA net that left Quick scrambling. The puck bounced off the back boards and came out in front with Quick still down and Nyquist jumped on it, knocking it into the net to make it 3-0.

With 4:32 remaining, Tomas Tatar made it 4-0, banging home a shot from the side of the net off a feed from Nyquist behind the goal.

With 9:19 left in the second period, Alec Martinez got the Kings on the board. After Detroit goalie Jimmy Howard thought he’d stopped Martinez’s initial shot, Mike Richards dug the puck free from under Howard and it came out to Martinez again for a backhander past the Red Wings’ netminder.

Tyler Toffoli pulled the Kings to within a pair just 1:48 into the third period while shorthanded. Howard stopped a shot by Trevor Lewis and attempted to keep play alive, passing the puck off to Henrik Zetterberg. The puck bounced and Zetterberg couldn’t handle it, with Toffoli jumping in to take it back. He dumped it out to Robyn Regehr who fired a shot back on Howard and Toffoli was there to pick up the rebound and put it in the back of the net.

The Kings had a chance to cut Detroit’s lead to one 41 seconds later but Howard stopped Dustin Brown on a penalty shot to preserve the lead.

Datsyuk would add an empty-net goal to round out the game’s scoring.

Detroit finished the night two-for-five on the power play while the Kings were scoreless on two tries with the man-advantage.

The Red Wings next play on Sunday in Buffalo.

Detroit lost defenseman Kyle Quincey to an ankle injury in the first period… Forward Stephen Weiss was placed on injured reserve before the game after suffering a groin injury while playing for the Grand Rapids Griffins on Wednesday in what was supposed to be the first of two games of a conditioning stint… The Red Wings’ healthy scratches were Daniel Cleary and Brian Lashoff.

The Detroit Red Wings shuffled their lines heading into Saturday's matchup with the Philadelphia Flyers, a move that immediately paid off as their new-look power play scored three times en route to a 5-2 win. 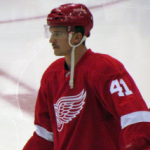