Miele, 26, is expected to join the Grand Rapids Griffins next season.

The Grosse Point Woods native split the 2013-14 season between the Phoenix Coyotes and their American Hockey League affiliate, the Portland Pirates. In seven games with Phoenix he had two assists. He had 27 goals and 45 assists in 70 games with Portland.

Miele was the Hobey Baker Award winner in 2011 as the country’s best collegiate player, during his senior year at Miami University.

Red Wings general manager Ken Holland announced on Friday that veteran forward Daniel Cleary, who cleared waivers and was assigned to the Grand Rapids Griffins on Thursday, will not report to Detroit's American Hockey League affiliate. 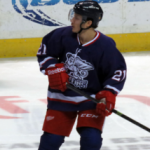 Just before free agency opened across the National Hockey League, the Detroit Red Wings locked up two pieces of their American Hockey League affiliate's run to the Western Conference Finals.