Much has been made of the Red Wings’ supposed youth movement over the past two seasons. Last year alone, eleven rookies played at least one game for Detroit. That number does not include Gustav Nyquist, Tomas Tatar and Joakim Andersson, who had played too many games previously to count as rookies. Eight of those made their NHL debut during the 2013-14 season.

In the face of injuries that decimated the Detroit lineup, the kids were called upon, and there was much rejoicing. But while the focus is on the fact that the kids got their shot, maybe it should be on the qualifier that it was only in the face of so many injuries.

The Red Wings did not make an effort to further their youth movement. If anything, they tried to avoid it, as Tatar was benched to start the season and Nyquist was in Grand Rapids following the late-summer re-signing of Daniel Cleary.

Of the players making their much-lauded NHL debuts, three played only that game. The now-departed Adam Almquist played two. Teemu Pulkkinen played three. Xavier Ouellet and Landon Ferraro played four. Only Luke Glendening played a significant portion of the season, getting into 56 games (more than Jurco and Sheahan, only one less than Nyquist).

Which brings us to this summer, where the Red Wings wanted to upgrade their defense and failed, missing out on every free agent they attempted to woo. Did this open a spot for Ryan Sproul, the right-handed shooter of the kind they said they were looking to acquire via free agency? No, the team instead brought back Kyle Quincey, a left-hander and the very definition of not an upgrade, as it leaves the team with the exact same blueline as it had last year.

The Red Wings have Sproul, Ouellet and Alexey Marchenko all nearly ready (if not now ready) to make the jump to the NHL and they’ve assured that no roster spots are available to do so. There will be at most one spot available next summer, and that’s only if the team opts to let Brendan Smith walk as a restricted free agent.

Three players near-ready on the blue line, where there won’t be three spots available until 2016-17, at which point the three will all be restricted free agents.

The Red Wings had their chance to commit to the youth movement. Let Sproul have a shot to win a spot in camp. Instead they opted to make no spots available and bring back Quincey. 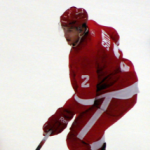 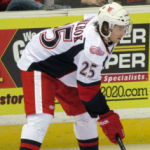